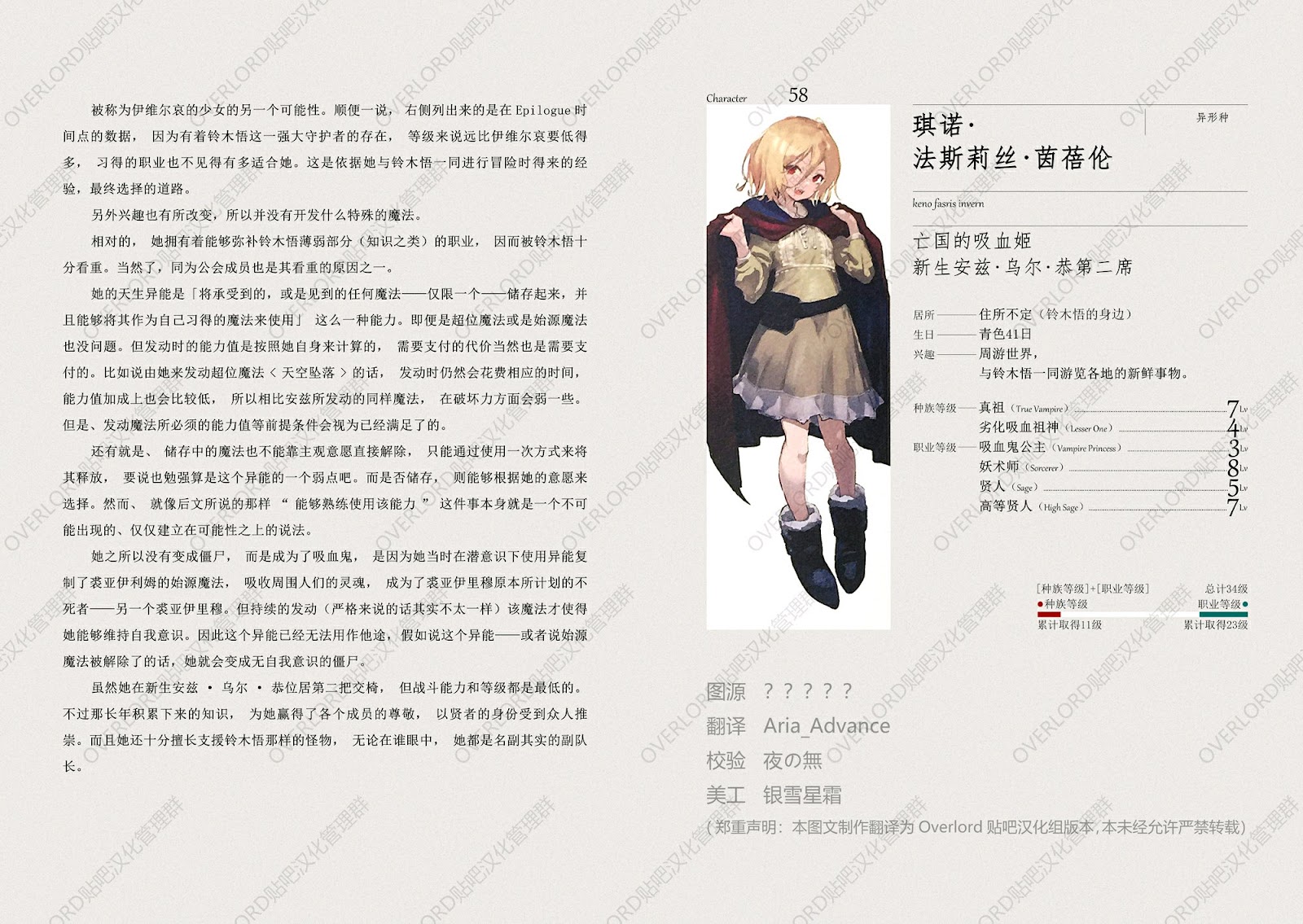 
Another possibility for the girl called Evileye. Incidentally, the data displayed on the right is for her
appearance in the Epilogue. Since she has a powerful protector like Suzuki Satoru around, she is
much lower level than Evileye, and the job classes she has trained aren't very suitable for her. This
is the path she eventually chose after her adventures with Suzuki Satoru


Her interests have also changed, so she didn't develop any special spells.


In turn, she has job levels that make up for Suzuki Satoru's weaknesses (mainly knowledge-type
jobs), and so Suzuki Satoru values her highly. Of course, he also values her because she's a guild
member.


Her Talent is "the ability to store any spell that she has seen or been targeted with — but only one —
and use it for her own." She can even use it on super-tier spells or Wild Magic. However, when
casting the spells, its effects are calculated from her own stats, and she has to pay any costs that
need to be paid. For instance, if she were to cast Fallen Down, it would take the same amount of
time to cast, and it would work off her lower ability scores, so it would be less damaging than the
same spell as cast by Ainz. However, she will be counted as having met the ability requirements for
casting the spell.


Also, she cannot willingly dismiss the stored spell. She can only release it by using it once, which
can be taken, as a stretch, to be a weakness. As for whether a spell is stored, that depends on
whether she is willing to do so. However, just like the "ability that she could use proficiently" that was
mentioned in the epilogue, this is something that was impossible to begin with and is merely founded
on possibilities.


The reason why she did not become a Zombie but a Vampire instead is because she was
subconsciously using her Talent to replicate Cure Elim's Wild Magic and absorbed the souls of the
people around her, becoming the undead being that Cure Elim had originally planned to be —
another Cure Elim. However, her sapience is only maintained through sustaining the spell (strictly
speaking, it's not quite the same as his). Therefore, her Talent can no longer be used for other
purposes, and if this Talent — or perhaps the Wild Magic — were dispelled, she would become a
mindless Zombie.


While she holds the Second Seat in the New Ainz Ooal Gown, she is the weakest fighter and lowest-
levelled member. However, her knowledge accumulated over long periods has earned her the
respect of the various members, and she is hailed by many as a sage. In addition, she is very skilled
at helping the monstrous Suzuki Satoru. There is no doubt that she is the group’s No. 2. 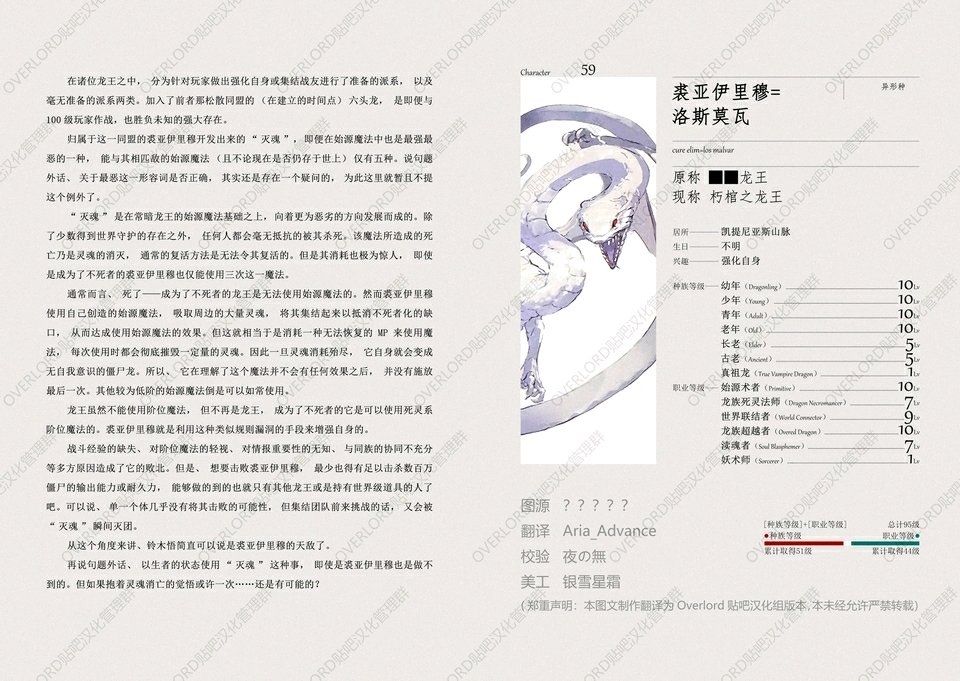 
Among the many Dragon Lords, there is a faction of those who have strengthened themselves and
gathered comrades in order to deal with Players, and those who have not. There were six Dragons
(at the time of its founding) who joined the former faction. Were they to fight level 100 players, the
outcome of their battle would be in doubt.


Cure Elim, as part of this alliance, developed "Soulbreaker", which is one of the most powerful and
most wicked techniques in Wild Magic. There are only five kinds of Wild Magic (leaving aside
whether or not they actually exist) which can contend with it. Incidentally, the accuracy of calling it
"most wicked" remains to be seen, and so we shall not touch on that exception for the moment.


"Soulbreaker" was derived from the Deep Darkness Dragon Lord's Wild Magic, albeit an inferior
version. Apart from a handful of people who have the protection of a world, anyone else will be
instantly slaughtered without any hope of resisting it. The death caused by this magic is the
destruction of the soul, and normal resurrection cannot revive its victims. However, it is also
extraordinarily draining and even the undead Cure Elim can only use this spell three times.


Usually, after dying — becoming undead, in other words — a Dragon Lord cannot use Wild Magic.
However, Cure Elim used its own Wild Magic to absorb a great deal of souls from around it, and
used them to compensate for the failings of the undead transformation, thus giving it the ability to
use Wild Magic. However, it is like casting spells from an MP bar that cannot be restored, and every
time he casts it, it utterly destroys a fixed number of souls. Therefore, once it consumes all its souls,
it will become a mindless Dragon Zombie. Therefore once it realized that this magic was useless, it
did not use it for the last time. However, it can use lower-level Wild Magic as normal.


While Dragon Lords cannot cast tiered spells, it is no longer a Dragon Lord but an undead being, so
it can cast necromantic tiered spells. Cure Elim used this loophole to strengthen itself.


It lacked fighting experience and looked down on tiered magic, and did not know the importance of
gathering information, and its lack of cooperation with its fellows led to its defeat. However, in order
to defeat Cure Elim, one must be able to deliver enough damage to kill millions of Zombies first, and
the only people who can do that are probably other Dragon Lords or holders of World-Class Items.
One could say that it would be almost impossible for an individual to defeat it. However, fighting it in
a group would lead to them being instantly annihilated by "Soulbreaker".


From that point of view, Suzuki Satoru is pretty much Cure Elim's nemesis.


As another aside, even the living Cure Elim would not be able to use "Soulbreaker", but if it were
willing to destroy its own soul... perhaps it might be able to do it once?


The author’s expression corner known as the Afterword has begun — since I didn’t write it there, I’ll
write it here! Since I’m as excited to be writing here as I am over there, please understand if I make
any minor mistakes!


Hm? This isn’t written in the same style as the afterwords to date? Hm. That might be so. After all, I
didn’t even write in the thanks at the end! Perhaps all the author’s thoughts have always been like
that!


—And so, this is the 14th book to me. Therefore, while I apologize to those people who are looking
forward to Volume 14, Maruyama’s heart is filled with the feeling that he’s finished Volume 14. The
next one will be Volume 15~


How do you feel after reading this spinoff?


Do you think Suzuki Satoru, as the MC of a LN, feels different from how Overlord has been until
now?


The battle scene in this book might have ended up becoming confusing. Originally, perhaps there
might have been a need to go “this is why he did so and so” but I deliberately omitted it. This work
really does place a big burden on its readers. Perhaps I might have failed as a LN author, but like
I’ve said many times, I personally think “it doesn’t matter if you don’t understand.”


Incidentally, while my editor keeps telling me “please make it easier to understand,” I haven’t heard
him say that recently. Like how I don’t want to clearly refer to Mare as a man and all that. Though
I’ve been using my own made up terms, so I think “everyone who knows gets it, right?” But then the
editor stopped me from doing that. Ah, how nostalgic. That’s a story from behind the scenes when I
was writing the first volume.


This was supposed to be a deluxe edition bonus, but I selfishly insisted that they publish it as a
book. Does it feel like it could stand on the shelves with the other volumes? If so, that would make
me very happy. Also, I originally wanted to add the stories of the first of the Thirteen Heroes at the
end, but I felt that it would mess with the tone of the epilogue, so I removed it. I have the feeling
Overlord will end without those stories ever being told!


Now, my thoughts about the various characters:


Satoru-san: He’s a man who routinely plays dirty to win. You should have seen how noble he was
when fighting Shalltear. That said, this Satoru-san is the one who comes off as a good guy overall.
Perhaps he would be this way if not for Nazarick. Does he seem like someone else? But he ought to
have a personally that’s just as twisted as his main line incarnation.


Keno-san: Did she achieve happiness in this story…? Very well, then … ahem!


As for what will happen after the epilogue, Maruyama has a vague idea for that in his mind. But
please, imagine it however you like, everyone.


...But how will things develop? Will they fight? Will they run? Or will they meet? Or perhaps an even
more different path? I would be very glad if you think “If I could write it” when you go to bed. I have
the feeling that if Satoru-san shared his knowledge with them, the New Ainz Ooal Gown could finish
off the Pleiades by themselves. They would be the world’s dream team. Well, as long as no other
powerful beings join the battle.


Cure Elim-kun: Anyone who saw the character sheet at the end of the book should understand that
he’s five levels lower than Satoru-san, so Satoru-san can definitely beat him — well, if you think that,
you’d be wrong. Even if they’re both level 100,  Touch Me-san is way stronger than someone with
100 job levels. In contrast, as a member of the Dragon Race and with powerful job classes, Cure
Elim-kun is actually more powerful than his 95 levels imply. Of course, thanks to level-based damage
adjustment, his odds of victory are lower. Whether or not he really exists in the mainline novels is a
secret for now. But if he does exist, his 200 years of study and accumulation mean that he will have
fewer weaknesses than in this book.


Well, that’s how I feel about all that. Well, I look forward to seeing you in the next volume, which
comes out in the middle of this year in the Maruyama Calendar. 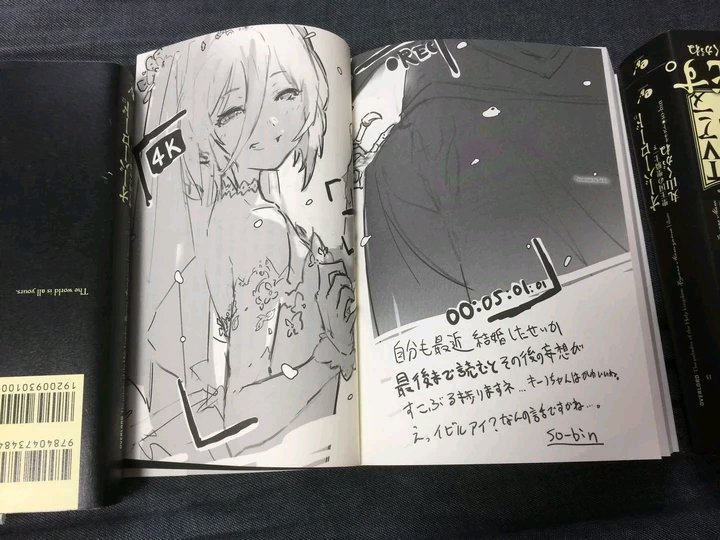 Maybe it’s because I just got married, but I can’t stop my imagination after reading to the end… Keno-
chan is so cute~ Huh? Evileye? I have no idea what you’re talking about...